Various companies have tried the modular trick for their smartphones in the past. While have some have been moderately successful, others have abandoned the thought after years of research. Lenovo launched the Moto Z and the Moto Mods at a global launch event in San Francisco a few months ago, and we got the review units a couple of weeks ago for a test drive.

One look at the device and you realise the kind of research that went into creating the Moto Z and the accompanying Mods. The Moto Z is one of the thinnest premium Android phones we have seen in a while. At just 5.2mm in thickness, the Moto Z feels incredibly thin to hold. The entire phone is made from military aircraft-grade aluminum and stainless steel.

The Moto Z just oozes style from all angles. On the front of the device, you will find a 5.5-inch Quad HD AMOLED display, which is quite crisp and delicious to look at. Colours just pop out of the screen and it provides great viewing angles, even under bright sunlight. The phone uses USB Type-C to charge and sync the data and oh, it does not come with a 3.5mm audio jack. Instead, Lenovo packs in a USB Type-C to 3.55mm dongle along with the device.

Under the hood, the Moto Z comes packed with a Qualcomm Snapdragon 820 processor, with 4GB of RAM. Internal storage is offered in two variants – 32 GB or 64 GB. In addition, the phone can let you expand the internal storage by up to 2 TB, through use of a micro SD card.

In terms of imaging, the Moto Z accompanies a 13MP camera on the back with optical image stabilization and laser autofocus. There is also a 5MP front-facing camera that features a wide-angle lens, for snap up all the selfies to your heart’s content. The front camera also features a flash module of its own, to ensure you end up with superb selfies even in low light. 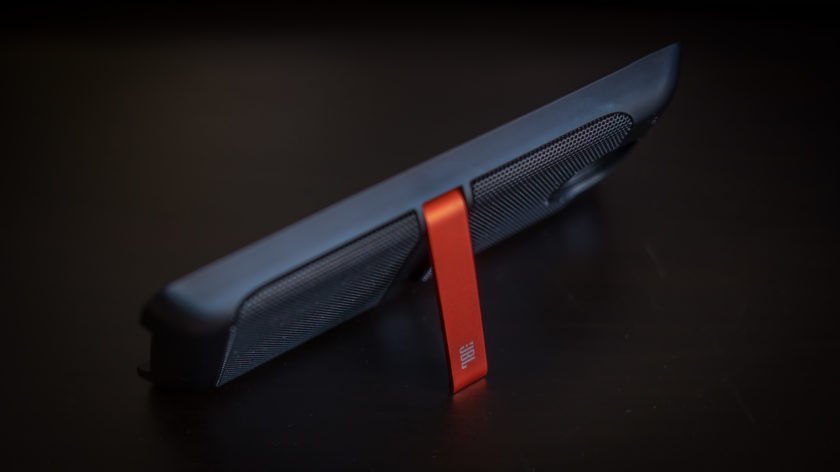 The stand out feature of the Moto Z is of course the Moto Mods and the customisation on this one is not about how the phone looks like after you snap the Mods on, but what your phone can do. There are four Moto Mods available on the market and we received three of those for review along with the Moto Z.

While one Mod can give your phone a meatier battery, another can turn it into a boombox for your weekend getaway. With another you could transform your Moto Z into a video projector, while another will give you a Hasselblad True Zoom camera right on your phone. 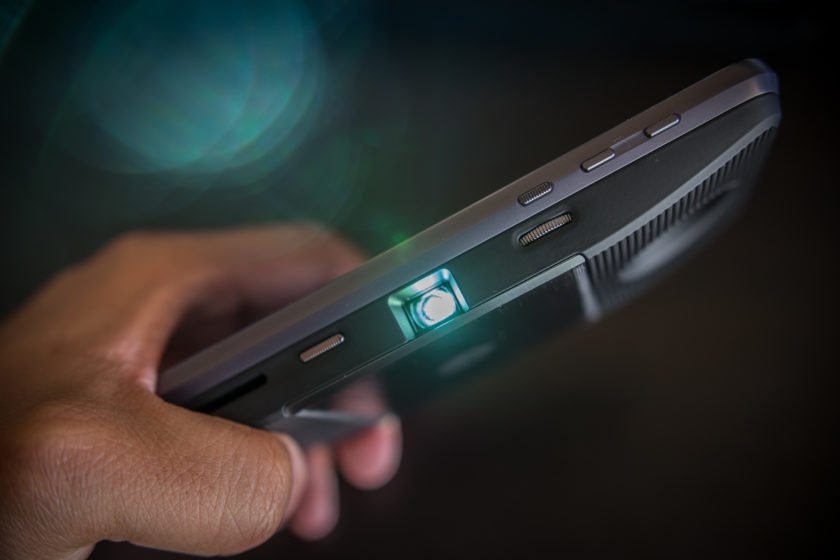 The Moto Insta-Share Projector Mod snaps onto the Moto Z, thus allowing you to project photos and videos onto a flat surface in big screen mode. The Mod projects up to 70-inches in display size and comes with built-in battery that provides users with up to one extra hour of screen time before using the Moto Z’s battery.

And our favourite was the Hasselblad True Zoom Mod, which attempts to completely transform mobile photography, and succeeds in a few areas, in doing so. The Mod adds advanced imaging capabilities to the Moto Z – it features 10x Optical Zoom and a Xenon flash, and allows you to shoot in RAW format. The Mod also offers you physical shutter and zoom controls. Images and videos shot using this Mod were quite good even under low light conditions.

The Moto Z also comes with water-repellant coating, which shields the phone from rain, splashes or spills that might come in its way. In terms of performance, the device’s 2.2GHz quad-core Snapdragon 820 processor works smoothly and swiftly. The camera launches quickly whenever I flicked my wrist. I could also swipe fluidly from one home page to another and my fingerprint unlocked the phone almost immediately.

On the whole, the Moto Z is a reliable and powerful device that can stand up to most of the top-of-the-line phones. In terms of modular ecosystem, the Moto Z is the best phone we have seen on the market yet. It thus wins Review Central’s Editors’ Choice award for the modular smartphone category.

“Six years have passed since Sony released the first 24-70 mm F2.8 G Master and in that time, our customers’ needs have changed,” said Murat Gebeceli, Head of Digital Imaging, Sony Middle East & Africa. “We are always listening to our community and have designed the new FE 24-70mm F2.8 GM II around feedback from creators in the region. Knowing the 24-70 mm focal length is extremely popular, it was imperative that we continue improving to bring our most advanced technology to such a critical lens in our customers’ kit. Today, we are thrilled to introduce the world’s smallest and lightest F2.8 standard zoom lens to the Middle East & Africa region.”

Even when shooting in challenging lighting conditions, the FE 24-70mm F2.8 GM II achieves excellent clarity by effectively subduing flare and ghosting. This is thanks to Sony’s original Nano AR Coating II which produces a uniform anti-reflecting coating on the lens surface. The FE 24-70mm F2.8 GM II produces stunning bokeh throughout the zoom range with beautiful and almost perfectly circular bokeh with its advanced optical design and a newly developed 11-blade aperture unit.

In this new 24-70 mm design, this lens delivers outstanding close-up performance with a minimum focusing distance of 8.25 inches (0.21 meters) at 24 mm and 12 inches (0.30 meters) at 70 mm, and with a maximum magnification of 0.32x. The FE 24-70mm F2.8 GM II achieves reliable focus by using four of Sony’s original XD (extreme dynamic) Linear Motors, a floating focus mechanism, and advanced lens control – even when shooting a fast-moving subject. In addition, the lens supports up to 30 fps continuous shooting for stills and 4K 120p video recording with autofocus.

Designed to perfectly pair with Sony’s compact Alpha system E-mount cameras, the FE 24-70mm F2.8 GM II is the world’s smallest and lightest1 24-70 mm F2.8 zoom in its class and offers unprecedented shooting flexibility and freedom in a wide range of situations. The FE 24-70mm F2.8 GM II weighs just 24.6 ounces (695 grams), approximately 20% less (7 ounces) than the original 24-70 mm F2.8 G Master. The lens’ length has been reduced by 16 mm, and overall volume has been reduced by approximately 18%.

The new FE 24-70mm F2.8 GM II was developed based on feedback from professionals to offer even better control and usability than preceding models. This model includes:

An updated dust and moisture resistant design provides extra reliability for outdoor use in challenging conditions. The buttons and switches are fitted with rubber gaskets, and a rubber ring seals the lens mount. The front lens element also features a fluorine coating that repels water, oil, and other contaminants, while making it easier to wipe off any contaminants or fingerprints that become attached to the lens surface.

Fujifilm has unveiled the Instax Mini Evo, its new flagship instant film camera with a premium build, higher resolution than previous models and improved smartphone integration. As with other Instax cameras, you can take photos and instantly develop them to Fujifilm’s credit card-sized Instax Mini film, but it offers a number of features not available on previous models.

As a hybrid camera, you can review photos on the LCD monitor and choose the ones you want to print. However, the new model is the first Instax camera with a print lever and lens/film filter dials. That lets you take a picture then choose among 100 combinations of effects (including “Soft Focus,” “Light Leak,” “Monochrome” and “Retro”) and print the image afterward by pulling the print lever. Fujifilm said the camera also delivers better quality prints as it has twice the exposure resolution of previous models.

Canon has launched the PowerShot PX, a small, smart and friendly camera, which automatically captures high-quality 11.7MP images and 60p Full HD video. The PowerShot PX’s smart features such as automatic capture of still imagery and video are set to reimagine how families capture memories. With this clever camera, families can enjoy the moment and still capture it, without having to stay behind the lens.

From family photographers to gadget-lovers, this new intuitive camera incorporates smart functionality to document social events and everyday memories. With automatic capture and priority shooting, the PowerShot PX is an innovative addition to the home that complements photographers’ existing cameras, and a shining example of Canon’s technology algorithm and the forward-thinking features constantly being added to its product line-up.

When you want to capture life’s precious moments and be in the shot, the PowerShot PX is ideal – following the action and framing subjects intelligently to capture natural expressions and reactions. Once switched on, the portable PowerShot PX can be placed anywhere around the home to take candid shots of everyday moments, while voice command capabilities allow complete hands-free control to capture still images or dynamic videos.

Thanks to the simple yet portable design, USB-C charging, and built-in Wi-Fi – which links to smart devices – the compact PowerShot PX can go anywhere. With intelligent facial recognition features, PowerShot PX uses auto-subject searching to keep loved ones in the frame and capture photos that otherwise might have been missed. Its 19-57mm focal length range and flexible pan-and-tilt zoom lens offer a broad field of view of 340˚ horizontally and 110˚ vertically to follow the action.

Look back on a digital scrapbook of candid moments with PowerShot PX’s iOS and Android app and get recommendations from this clever camera on the strongest shots to keep. These cherished photos and videos are then stored on a memory card for easy upload to a computer. Manually control the camera with the app to compose the perfect shot and capture images from a distance, all without the need to run back and forth to check the device. Families can even customise automatic shooting settings, angle the lens to snap pictures in their own style and select familiar faces within the app to increase priority when shooting. The PowerShot PX can also double as a webcam with the use of the PC webcam utility app.

The ASUS Zenbook 14 OLED (UX3402ZA) is one of the most elegant and premium-looking ultrabooks we have reviewed in recent...

The HP Spectre x360 Convertible Laptop is a beautiful device that comes packed with a brilliant set of specifications. The...

In recent years, the demand for lightweight, high-performance laptops has been increasing. Users are craving portable laptops to satisfy their...

Dynabook’s Portégé X30L-K is an ultra-lightweight laptop that comes packed with a 13.3-inches display. The overall form factor of the...

Have you ever used a mouse that comes with a built-in joystick? Well, we had an opportunity to test out...

Why You Should Use a VPN While Traveling